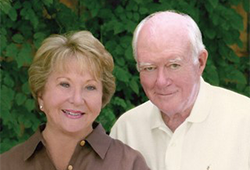 Determined to help scientists find a cure for an eye disease that has touched their family, Dorothy and Roger Hirl have given $375,000 to Southwestern Medical Foundation to support ophthalmology research programs at UT Southwestern.

Given in the form of a charitable remainder trust that matured in 2011, the gift will foster research into retinitis pigmentosa (RP) and other degenerative retinal diseases.

"We think so highly of the research being done at UT Southwestern and felt that this would be an opportune time to support a cause that has great meaning to us," said Mr. Hirl, a longtime leader in the U.S. chemical industry. "We can think of no better investment than in the future of medicine."

The Hirls first became interested in retinitis pigmentosa-a genetic disease that, in advanced cases, leads to a total loss of vision-after a family member was diagnosed with it. Symptoms of RP often appear in childhood, but severe vision problems, including decreased night vision and loss of peripheral vision, often do not appear until early adulthood. Because there is no current treatment for RP, research targeted at slowing its progression is of particular urgency, explained Dr. Yu-Guang He.

"We are thrilled by the Hirls' important contribution," said Dr. He, associate professor of ophthalmology and holder of the Zora Meagher Macular Degeneration Research Professorship and the Josephine Long Biddle Chair in Age-Related Macular Degeneration Research. "Support for the study of incurable eye diseases like retinitis pigmentosa is invaluable. Without it, it would be impossible to move ahead in our search for an effective way to preserve the vision of the thousands of patients affected by the disease. This gift will be of great value as we research better methods of diagnosing, slowing down and eventually curing degenerative eye disorders."

Mr. Hirl retired in 2003 as president and CEO of Occidental Petroleum Corp. (OxyChem), where he served for two decades. He is past chairman of the Chlorine Chemistry Council and is an appointed member of the Industry Policy Advisory Committee, jointly administered by the Office of the U.S. Trade Representative and the Department of Commerce. He is a past chairman of the Chemical Manufacturers Association; the Plastics Division of the American Chemistry Council; the Chlorine Institute and the Society of Chemical Industry, American Section.

He has received numerous awards and honors for his leadership, including the Chemical Industry Medal (1997) and the Chemical Educational Foundation's Vanguard Award (2001). He was presented the Susan G. Komen for the Cure Individual Award for Philanthropy in 1994.

The Hirls also chaired the 1994 Southwestern Ball, which raised more than $1 million to support research at UT Southwestern on spinal-cord injuries.