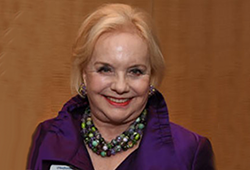 Dr. Cecil O. and Berta Patterson stood for the tradition of giving and caring for others. Their daughter, Patricia "Pat" Patterson, learned important life lessons through her parents' fine example of hard work and achieving one's dreams.

Cecil O. Patterson was born in 1901 in Creechville, Texas, and spent his early years in Ennis, where he and Berta Maris grew up. He lived on a farm and saw absolutely grinding poverty before the Depression started for the rest of the country. "My father saw the bank come and take the chickens, pigs, car-the whole thing-and he wouldn't borrow money. He borrowed $10,000 one time and got so worried that he returned the next morning and paid it back because of that kind of background. My parents lived in Ennis until the day they married, and they took a little trolley car from Ennis to Dallas."

Cecil took odd jobs and put Berta through Southern Methodist University, where she earned a master's degree in English in 1929. At that time, most women didn't attend college. The Dallas Public Schools would not hire a married woman, so she taught at Hillcrest High School-the closest school outside the city limits-and became principal. When she started earning a paycheck, she put Cecil through medical school.

Dr. Patterson trained in gastroenterology at Baylor College of Medicine and Baylor Hospital in Dallas, where he earned his medical degree in 1931. He became a prominent Dallas gastroenterologist and would spend the next 51 years devoting his life to caring for the sick and advancing knowledge in gastroenterology at various Dallas-area hospitals. He began training physicians in 1943 at Southwestern Medical College, where he served as one of the original clinical faculty members. Nicknamed the "father of endoscopy," he was the first physician in Dallas to use the endoscope-an optical instrument used to inspect the esophagus and interior of the stomach. As a researcher, Dr. Patterson pioneered new methods to prevent bleeding in the esophagus, and these and many other techniques are still used today.

Dr. Patterson influenced two generations of medical students and residents in internal medicine through his active instruction on the wards of Parkland Memorial Hospital, even though he received no financial benefit.

"At that time, doctors didn't have to be associated with one hospital," said Ms. Patterson. "He taught at Southwestern Medical College and was the first person to bring the gastroscope to Texas. It was the first time anyone put a tube inside a person for medical purposes."

"As a child, I remember driving with my mother to pick my father up from work. By the time he'd come out of the building, he'd be too tired to drive home. She would get up very early in the mornings to drive him back to work or drive him to his courses at UT Southwestern. One third of his practice was volunteer charity care for indigent patients because that was before Medicare and Medicaid existed. He and my mother were always very involved with the school.

"I wake up grateful to UT Southwestern," Ms. Patterson said. "I have watched the Institution evolve through the years, attracting diverse and exceptionally talented people from around the globe."

At the time of his death, Dr. Patterson had the largest collection of gastroscopes in private hands. Through the generosity of Ms. Patterson and her daughters, Patricia Farman-Farmaian and Caroline Barlerin, the Cecil O. Patterson Endoscope Collection is on permanent loan and displayed in the UT Southwestern Library atrium. The collection highlights the development of the endoscope from a rigid instrument that mainly visualized the lower end of the esophagus, to the early semi-flexible scopes, to the modern day fiber-optic and video chip cameras. Dr. Patterson used all scopes except the video chip in the course of his practice in Dallas.

Ms. Patterson also established the Berta M. and Dr. Cecil O. Patterson Chair in Gastroenterology at UT Southwestern to keep her father's extraordinary legacy alive and to help attract the best and brightest gastroenterologists to the region. She co-founded the Carolyn P. Horchow Women's Health Symposium, UT Southwestern's signature health care educational program. This annual event enables women to connect with physicians and learn about the latest breakthroughs in women's health. Through her roles on the UT Southwestern Board of Visitors, the campaign committee to build Zale Lipshy Hospital, as a member of the President's Advisory Board, and as a member of various UT Southwestern Friends groups, Pat stays present and involved and has become a force for leadership and growth in the UT Southwestern community.

Grateful for her many roles-as President of Patterson Investments Inc., a Dallas investment firm; as Deputy Chair of the Federal Reserve Bank of Dallas; as a mother; as a grandmother; and as a friend to the Dallas community-she looks to the future of UT Southwestern with confidence and hope. And by becoming a charter member of The Heritage Society-the UT Southwestern/Southwestern Medical Foundation legacy giving society-and including UT Southwestern in her will, Ms. Patterson is paving the way for future generations of health care professionals and researchers to heal, innovate, and educate, just like her father did for so many years.