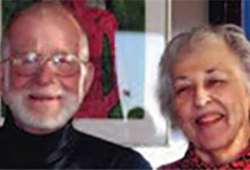 Dallas civic leaders Benjamin and Selma Parrill died in 2007, just 13 days apart. But before their passing they bequeathed $625,000 to Southwestern Medical Foundation to support oncology, cardiology and general medicine programs at UT Southwestern and to honor the work of two well-respected faculty physicians who cared for them through their final stages of life. The gifts also established a scholarship in honor of Mr. Parrill's mother and contributed to a previously established endowment honoring their daughter, Claudia Parrill-Smith.

To honor their daughter, Claudia Parrill-Smith, a gift of $25,000 was distributed to an endowment in her name to benefit the Children's Medical Center's pediatric oncology work. The final gift of $100,000 endowed the Flora Miller Award Fund to help medical students pursue their dreams of becoming doctors.

Mrs. Parrill was born in Chicago in 1927. A talented artist, she attended the Art Institute of Chicago and the University of Wisconsin before coming to Texas. Also an avid reader, she served as treasurer of the Friends of the Dallas Public Library and was a touring docent for the Dallas Museum of Art and the Nasher Sculpture Center.

Born in New York City in 1917, Mr. Parrill began working at the age of 10 and continued through his graduation with honors from Columbia University School of Business in 1937. He began his business career as an executive at R.H. Macy, and after serving in the American Red Cross and the U.S. Army, he relocated to Dallas in 1946. He served as president of Texas Miller Products, president of Adam Hats, chief executive officer and chairmen of Miller Bros. Industries in Dallas and New York and president of the Hat Institute of America. A bachelor until he was 45, Mr. Parrill married Selma Novy, then a recent widow with four young children, in 1962.